Saleh Rustamov, the former chief executive of Gadabay District (1992-1993), said he would go on a hunger strike in prison.

“Today, we had a telephone conversation with Saleh, and he was able to convey some 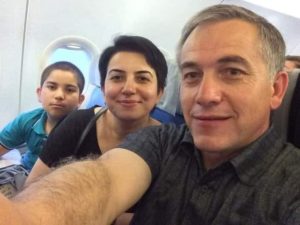 specific issues. There had been several preventive talks with him before the latest pardon order. He was offered to write a pardon letter, and Saleh rejected the offer. As a result, they began to pressure him. Saleh said that the ugly campaign has started in Prison No. 13. His family members and relatives are being threatened. He is being told through various detainees that exposing materials will be spread about him. ” said Taleh Rustamov.

He said that the President instructed the campaign against Saleh Rustamov. Saleh also told his brother that he might start on a hunger strike if the regime wouldn’t stop the campaign.