Article 21 of the International Covenant on Civil and Political Rights to which Azerbaijan is a party since 1992 and Article 11 of the European Convention on Human Rights and Fundamental Freedom ratified by Azerbaijan in 2002 bind Azerbaijan on respecting and guaranteeing freedom of assembly in the territory of Azerbaijan. Despite this right is not absolute, Government’s margin of appreciation is very narrow on this right and both articles describes in which situations this right may be restricted. This right of our citizens is also recognized Law of the Azerbaijan Republic on the Freedom of Assembly. However, in practise the right to hold rallies, demonstrations and pickets is denied. Though the Law on Freedom of Assembly carries lots of shortcomings, it has certain provisions clearly guarantee the freedom of assembly. However, those provisions are misinterpreted in a way restricting this right. For instance, in the law for holding assemblies, only “prior notification” is required, but in practise it is interpreted intentionally as “prior authorization” so that relying on such erroneous interpretation, all rallies, demonstrations and pickets are prevented unlawfully.

Azerbaijani Government didn’t permit to enjoy freedom of assembly for long years. Only after the long lasting struggle, the opposition achieved to get permission to hold rallies near the city centre –in the stadium “Mahsul”. First times the government didn’t interfere seriously with the rallies held there. However, since number of rally participants increased gradually, the government took some repressive steps in order to prevent even authorized rallies.  Since huge number of people attended the 11 September 2016 rally organised by the opposition in protest to constitutional referendum intended to consolidate the power of the president, the Government applied new methods with a view to preventing crowded rallies: holding rallies on Sundays were prohibited (Sunday is in fact only non-working day in Azerbaijan and for these reasons more people join the rallies); prior to and during the rally day organizers and activists were started to be arrested despite the rallies were authorized; the rally participants were identified by the biometric cameras installed in the rally venue, then they were summoned to police stations, administratively arrested, fined, threatened and warned. By this way the Government intended to prevent mass participation in the rallies but this method didn’t work.

Finally, the 19 January Rally of the National Council was the most crowded rally of the opposition since 2005. Afterwards, the government closed the doors of the “Mahsul” stadium to the opposition. In last 8 months, the National Council appealed 7 times to the Baku Executive Authority to hold rally in the stadium but got negative response. As a response to the last appeal, the government recommended the stadium located in Lokbatan, very far from the city centre and is too difficult to reach by transport. This response meant that the Government completely denied the right to freedom of assembly.  For third reason, the National Council decided to hold picket in front of the central building of the Baku City Executive Power.

Right to freedom of assembly is one of the vital fundamental rights and a precondition for some other rights. This right is also crucial in effective operating of the political parties and existence of pluralism. This right also play an indispensable role on ensuring free and fair elections. Denying this right means denying the freedom expression, free and fair elections, political pluralism, the right to association in political parties, finally denying democracy. By acceding to or ratifying abovementioned international treaties, Azerbaijan is not only obliged not to interfere with this right but also to protect the rally participants from any kind of interference and to secure the safety of rally participants. However, the government itself is a main obstacle to the enjoyment of this right.

Having regard to the facts above, the National Council demands from the government to comply with Azerbaijan’s international obligations and national legislation, lift the restrictions imposed to the right to freedom of assembly, ensuring rallies, demonstrations and pickets not only in the capital city but also in the whole country, put an end to punishing those who participate in the rallies, arresting, fining, threatening, firing them. Azerbaijani government has to ensure that local executive powers, in particular Baku City Executive Power comply without any condition to the Constitution of Azerbaijan by guaranteeing the right to freedom of assembly. 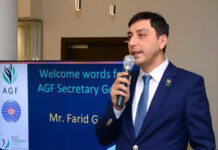