To German authorities and relevant International human rights groups about the arrest of political immigrants, AND organization
APPEALS

The world community already knows that the Azerbaijani political authorities are grossly violating human rights, restricting freedom of speech and expression, and arresting public and political activists by ordered courts. Instead of fulfilling the obligations of the international organizations of which it is a member, as well as membership, Azerbaijan grossly violates it. It is no coincidence that over the past three years, Azerbaijan ranks 168th out of 180 countries in the index of freedom of speech. There are more than 150 political prisoners in the country. Detainees are subjected to severe torture and are forced to testify against opposition leaders and public figures. Reports of international human rights organizations (Freedom House, Amnestey International, Human Rights Watch, Reporter Without Borders, etc.) refer to the arrest, torture, intimidation, of journalists by administrative and law enforcement offices, political party activists, civil society members, and social media representatives are summoned to authorities. There is enough information about this summoning.
Ilham Aliyev and the government led by him are continuing their repression instead of drawing conclusions from the criticism presented in the reports of international organizations by following the demands and recommendations. Thus, the Azerbaijani authorities not only threaten and arrest members of political parties, journalists, bloggers and political activists operating in Azerbaijan, but also arrest close relatives of political activists abroad, summon and threaten the police and security agencies. Their relatives working for the state are fired.
Following the signing of the Agreement between the Republic of Azerbaijan and the European Union on the readmission (return) of persons residing without permission in 2014, it accelerated the return of persons living abroad, especially in Germany. However, while the main requirements and obligations of the Agreement were that the Azerbaijani government should assist in providing employment, readmission and psychological assistance to readmitted persons, deportees, especially political immigrants, began to come under pressure. They were regularly summoned to law enforcement agencies and asked to testify against the leadership of a political party.
Arrests of deportees have already begun, as 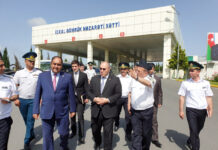