The events in Armenia were overshadowed by the consequences of the attempted coup in Turkey. However, they serve a serious reminder of how risky and deceptive the continued political “stability” in the countries of the region might be.

The development involved a complex knot of players and groups of interests, unhappy with the policies of the current president and the growing erosion of the legitimacy of power.

The armed group Sasna Tsrer, who attacked the police station in the Armenian capital Yerevan, took hostages, and demanded the resignation of President Serzh Sargsyan on the 17 July, were reacting to the arrest of their leader in June this year. Lebanese born Jirair Sefilian is a representative of radical opposition, and a former commander in the Karabakh war. The arrest took place against the background of negotiations in a trilateral format involving Armenia and Azerbaijan with mediation by Russia, and was perceived as an attempt to neutralise a critic of Sargsyan’s policy on Nagorno-Karabakh. Not unlike in previous cases in Armenia’s history in which there were also indications that a deal on Nagorno-Karabakh might be struck or hints on possible compromises, violence is present. This happened in 1999, when eight people were killed in parliament, and many suspected the hand of a Russia for whom the peace deal was of no interest. 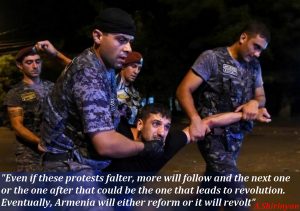 This time the events were triggered by an armed opposition group, some members of whom had experience with or ties to the terrorists of the large Armenia diaspora from other countries. Sefilian’s agenda included a non-compromising stance on Nagorno-Karabakh, the release of political prisoners, and a range of political reforms including greater accountability of those in power, transparency of decision making, and more. Importantly, one of Sefilian’s objectives is the gradual and complete transfer of border control from the Russian to Armenian forces. The unusually broad public support for this otherwise rather marginal and not very popular political group is indicative of the degree of political crisis in the country.

There are always more radical forces in society ready to resist any compromise in the Karabakh conflict, and the reason they manage to mobilise people using the issue as a trigger is often the extreme division between the Armenian elite and the rest of population, anti-popular and non-transparent policies, corruption, and inequality. A further influence is that 22 years of Armenia military control of the “liberated territories” claimed by Azerbaijan has not led to a significant improvement of living standards or any serious breakthrough in the development of the country or the Nagorno-Karabakh region. Moreover, as the four-day war in April this year proved, it has not even improved security, in the name of which the Armenian population was called to tolerate poverty and lack of democracy.

The four-day war also demonstrated the futility of relying upon the historical ally Russia, which appeared to play a more sophisticated game by supporting one or another party in the conflict. Both the U-turn on the eve of the signing of the EaP Association Agreement in 2014 and the recent media information about possible compromises on Karabakh and fears that they will take place without consultation with the public increased the perception of extreme dependence and vulnerability of the current government to Russian pressure. In fact, the unresolved conflict serves as a perfect tool for Russia to keep the elites of both conflicting states under its control, but it also helps those elites to mobilise public support when needed, using a nationalist agenda. Political and economic power are merged and there is very limited capacity for “outsiders” to get an access to resources. The extreme dependence of Armenia’s economy on Russia and the oligarchs, on the “status quo” institutions, and their implications for the social situation has repeatedly been the cause of pubic activism during recent years.

The protest of the armed opposition has demonstrated the multiplicity and diversity of those groups whose interests have suffered during the monopolistic rule of the present government in Armenia.

The domestic consequences for Armenia will depend on the perception of the causes of the events by the ruling elite and the degree of their confidence in its capacity. The usual reaction in the countries of the region, toughening of the regime towards dissent, is typical of the autocrats holding conspiracy-based views of politics and who are suspicious of any external hand in domestic disturbances. This sort of view may lead to greater pressure on the opposition, media and civil society. Greater and uncontrolled instability in Armenia may pave the way for the radicals and lead to still greater Russian involvement in taking advantage of the turmoil, resulting in a threat to Georgia, as this is the only way that Russia can access Armenia. The high number of powerful people from the army and with military experience, as well as players with ties to terrorist groups, may lead to tougher and wider confrontation in the country and beyond, as will have inevitable implications for the conflict and security of the neighbouring states.

Most importantly, the lessons which the events suggest to the international community is that “stability” and “status quo” in countries with entrenched  leaderships and elites potentially represent a much greater challenge to security than do dynamic and changing political landscapes. The autocratic grip on power, accompanied by increasing erosion of legitimacy, leads to a public perception that there are few, if any, peaceful means of influencing politics. Attempts to use force to influence politics or change power in a few countries in the region (the attempted military coup in Turkey and the armed revolt in Armenia) demand a more sceptical assessment of the advantages of stability based on “frozen leadership” and greater attention to and active investment in finding a political solution to the conflict and democracy building.
the original here 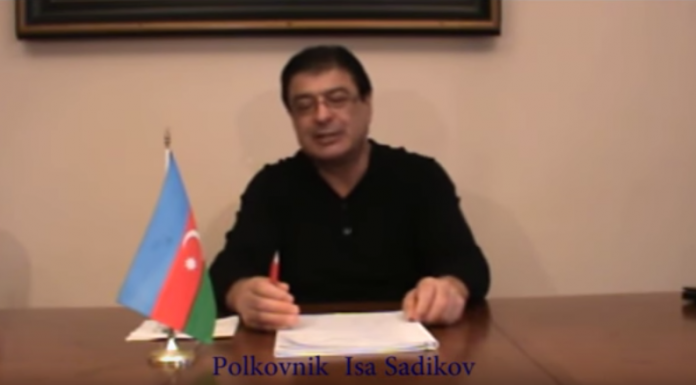