We present to you the interview given to “Azerbaijan Saati” by Ramis Yunus, a prominent political analyst, who answered questions regarding the upcoming referendum on amending the Azerbaijani Constitution.

1. What is reasoning behind the emergency referendum?

When describing the tyranny of the emperors of Ancient Rome and the servility of the Roman Senate, one wise man stated that “haste is close to fear.” Unfortunately, this aphorism accurately describes many of the motives for such a sudden initiative by the Aliyev family to legitimize neo-monarchy in Azerbaijan by actually making the process de facto de jure. The parallel with Ancient Rome and the monarchs there is evident through several measures, notably the fact that there are processes in modern Azerbaijan which do not meet the criteria of the country, which is part of the Council of Europe. Furthermore, it is not by chance that following the announcement of the referendum and explaining the ideas behind the reduction of the age limit for president as provided in the proposed draft on amending the Constitution, Ali Ahmedov suddenly began to draw parallels to the times of Alexander the Great, Shah Ismail Khatai, and Napoleon, all of whom he claimed led government at an early age, making the case that Shah Ismail came to power at the age of 14, Alexander the Great at 20, and Napoleon at 30. It is strange that Ahmedov did not recall the story of Kim Jong-un, the current ruler of North Korea, who was 27 years old when he came to power by the same succession through three generations of his family, which is at-present a more realistic comparison with Azerbaijan.

To answer your question: yes, the Aliyev regime is driven by a real fear of the possible consequences for their family, in the case of a force majeure situation in the region, which can lead to a change in power overnight, just as was seen a few years ago in the Arab world. They absolutely do not want to repeat the mistakes and share the fates of Saddam Hussein, Muammar Gaddafi, Mubarak, and the other odious rulers and their numerous family members. As such, they have begun to take preventative measures in order to fully eliminate the resistance from the inside. The creation of the position of first vice-president and the change in age limit for the presidency are the first signs of said measures.

2. What will be the consequences of this referendum?

I must say that over the years of their reign, the Aliyev regime has constantly repressed other political parties, activists of youth organizations, independent journalists, and representatives of civil society. In doing so they have been able to almost completely eradicate the resistance present in the Azerbaijani society, instilling fear into the consciousness of the people. A clear manifestation of this was seen in the so-called “Four Day War” in Nagorno-Karabakh in April this year, which led to the deaths of a huge number of Azerbaijani soldiers and officers. Furthermore, Azerbaijani society has been forced to simply swallow the blame, although similar situations have resulted in previous leaders of Azerbaijan being overthrown. This regime has grown to the point where even the events at Nagorno-Karabakh have been used as a means to enhance their political power based on jingoism, along with a witch hunt for internal enemies in Azerbaijan. The Azerbaijani society has effectively given the Aliyev regime a carte blanche to conduct these shameful behaviors in my homeland, the consequences of which many cannot even imagine at this time. In fact, the Aliyev regime presently challenges the foundations of the Azerbaijani statehood, laid down by the founding fathers of the Azerbaijan Democratic Republic in 1918-1920, whose legal successor is the current Constitution of Azerbaijan after gaining independence in 1991. Therefore, it is very important today that all of the citizens of Azerbaijan who are not indifferent to our statehood, would be able to form a united front against the proposed changes to the Constitution. Otherwise, the result will be very catastrophic for Azerbaijan and its statehood in the coming years. Many examples of this can be seen in recent history with other authoritarian countries. In this regard, I would like to remind you that “history often cruelly mocks those who try to walk in her footsteps.”

3. What are the possible reactions of democratic institutions on the outcome of the referendum?

Let’s be frank: Azerbaijan is not a very important country in the political map of the world. It is not one that attracts the attention of the Western world, and the Aliyev regime knows and manipulates this skillfully. Due to the presence of the mineral resource base in Azerbaijan, as well as its useful geostrategic position, the Western world does have an interest in the country. While this has kept the country in check for several years, the Aliyev regime has begun to take advantage of the laziness of both the United States and Europe, allowing themselves to begin to break the rules previously negotiated with them. The Western world, particularly the United States quickly pointed out his place in the geopolitical sphere of the world, and he was required to slightly ease on repression and to release many political prisoners.

Today, Aliyev’s regime once again tests the Western world. I can tell you that the reaction of both the United States and Europe will depend on how the Azerbaijani society will express their notions, and whether they will signal “SOS.” It is only thanks to the fact that the topic of political prisoners has reached the highest echelons of power in the major capitals of Europe and the United States that we have been able to release many prisoners. However, if we want to secure the release of all other political prisoners, then we should be able to present a united front against the amendments to the Constitution, and that’s when you can count on the support of the United States, Europe, and the leading democratic institutions of the world. Otherwise, Azerbaijan will be forced to experience further frustration, because where hope dies, there arises a void. 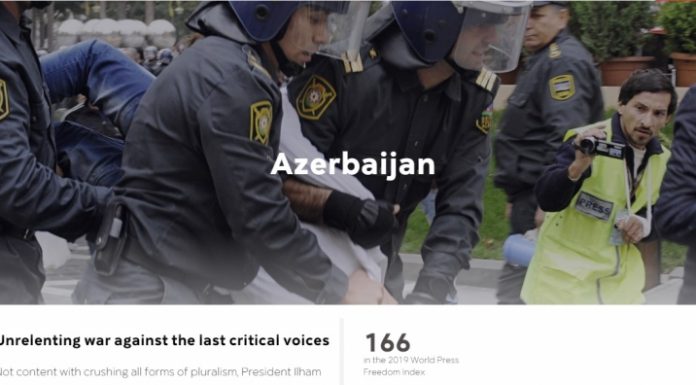